Menu
Home > news > After 81 years for the first time at the European Championships: Finland celebrates the big Pukki Party 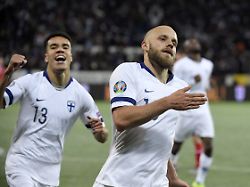 Ex-Schalke Teemu Pukki is well on his way to becoming a Finnish hero. He shoots the ice hockey nation in the north for the first European championship in their football history, ending for a Finnish reporter "Decades of misery."
After the biggest football triumph in the history of their country, ex-Schalke team-mate Teemu Pukki and his national team voted the Finnish counterpart to "We are the Champions". "Me ollaan sankareita kaikki, jos oikein silmiin katsotaan" (We are all heroes when you look us straight in the eye), marched the men of successful coach Markku Kanerva after their historic 3-0 (1-0) victory over Liechtenstein , which was synonymous with Finland for the first European Championship qualification ever. Throughout the country, the big pukki party was already in full swing right now. "Now we are an EM team – that feels totally unreal", Pukki cheered after the match on Friday evening. "All football Finland has longed for so long after this, playing for the national team was my first dream, and it came true ten years ago, but I did not even dare to dream that." Despite the final qualifier in Greece on Monday, his team made the night of Helsinki. Pukki, Leverkusen keeper Lukas Hradecky and their teammates have succeeded in doing what the Finns have tried in vain for over 80 years: the qualification for a World or European Championship for men. More than 30 times in a row, the Finns failed, even with their legend Jari Litmanen or later with defensive line Sami Hyypiä. But then came Pukki: With a double against Liechtenstein and a total of nine of the 15 Finnish goals in the qualification of the former Schalke had a significant role in that the Finns now go to the European Championships. "Finland is ready for the European Football Championship" "We have dreamed of since we first participated in the World Cup qualification in 1938. The dream of generations has come true, "the team cheered on his Twitter account. "All of Finland will have a party next summer like never before." The Finns already provided a foretaste of this: in the stadium countless fans stormed the square immediately after the final whistle, shortly afterwards firework rockets were fired near the stadium. Pukki himself later had the champagne cork crack in the cabin, his Premier League club Norwich City invited to an official "Pukki party" in a nightclub in Helsinki. Everywhere in the country Finnish flags were waved and tears of joy shed on Saturday night. Hundreds of fans celebrated on a central square in Helsinki. Some climbed there on the statue Havis Amanda, on which the Finns had already celebrated the title at the Ice Hockey World Championships six months ago. The ice hockey nation Finland has now proved one thing: they can also play football. Or as a reporter from the Finnish radio station Yle put it on a historic evening: "Decades of misery are over now! Finland is ready for the European Football Championship!"