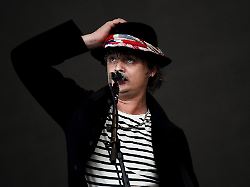 It is not the first, and not the last, allegedly: Pete Doherty is arrested because he has cocaine with him. In the process, the singer of the Babyshambles and the Libertines may not even get along properly, as the police arrest him in Paris.
British rock musician Pete Doherty has trouble with the judiciary in Paris. He had been arrested for acquiring narcotics, the prosecutor confirmed. When he was arrested, the musician was drunk and tried to resist the officials, they said. He also tried to make two packets of cocaine disappear, one of which had been opened and partly consumed. After his arrest, the 40-year-old ex-boyfriend of top model Kate Moss had to spend the rest of the night in a cell. The singer of the indie bands Babyshambles and The Libertines had repeatedly come in the past with addictive drugs in the headlines. Doherty consumed according to their own statement for about 18 years, hard drugs such as crack and heroin. Several times he went – voluntarily and forced – in withdrawal, most recently in 2014 in Thailand. After his stay there, his sober phase had lasted "about ten minutes", the musician had confessed to the British "Guardian". As soon as he was at home, the addiction had regained control of him.Doherty had to answer several times in his career in court, he was in prison, concerts were repeatedly canceled and albums postponed. Even from the detox clinic Doherty had flown once, after he had mobbed fellow patients.