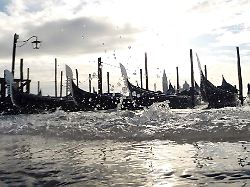 In the Mediterranean it will be uncomfortable on the weekend again. Deep "Luis" brings storm and gale gusts and again gigantic amounts of rain. Bad news is this, especially for the last long-suffering people in Venice.
The Mediterranean just does not come to rest. Currently, the remains of deep "Keke" still provide direction Greece and Turkey for some strong thunderstorms. Unfortunately, the storm situation is not over yet. Because with "Luis" now approaches the next storm low from the Atlantic. And that ensures from west to east in the Mediterranean for the next explosive weather conditions. In addition to storm and gale gusts, several hundred liters of rain per square meter are threatening, which turns into snow at high altitudes. In addition, the people in Venice have to adjust to the next "Acqua alta". Storm depression "Luis" moves from the Atlantic directly across the Iberian Peninsula and to the western Mediterranean. Thus, Portugal, Spain and southern France are affected first. In the afternoon and evening the wind blows on the mountains, like the Pyrenees in peaks already with full hurricane strength over 120 kilometers per hour. And even in the lower reaches to Mallorca, gusts are about 100th in it. At the same time, the waves pile up meter high and the rain lashes over land and sea. Particularly heavy it pours where the rain clouds are squeezed out on the mountains. That is, around the French Massif Central and the French Alps down to the Gulf of Genoa. Here, up to and including Sunday, local rainfall of more than 400 liters per square meter can not be ruled out. An aggravating factor is the fact that we are looking at a very wet history in the affected regions. The floors are soaked and can barely buffer the water. In addition, the adjacent mountains have a high relief energy. The water then flows rapidly down the valley and threatened by floods again Murenabgänge and landslides. Snow in the highlands After last, yes, rather the eastern Alps were hit by some intense snowfall, now the western Alps are in the south dew. The snowfall limit is more likely to be 1500 to 2000 meters. Nevertheless, there will be some 1 to 2 meters of fresh snow in the highlands. Especially around the French Alps. The wind blows here also stormy, so that the snow is also shipped. A dangerous situation that will sharpen the avalanche danger in the high mountains. On Sunday, "Luis" arrives in Italy, blowing the storm from the south-east towards Venice, which in turn increases the water level in the region. It will not be as heavy as during the last storms. Nevertheless, the flood on Sunday morning should be increased by a good 1.25 meters and thus is well half the city affected by the "Acqua alta". And also the big rest of Italy are threatened on Sunday partly heavy rainstorms and thunderstorms with storm gusts. For the week change and at the beginning of the next week "Luis" turns its circles on the eastern Mediterranean. With luck, the low has lessened until then. Nevertheless, the people there will also have to adjust to the next storm with heavy rainfall and heavy thunderstorms and storm gusts. Since late summer extraordinary storm series The Mediterranean belongs to the regions of the subtropical winter rain areas. In this respect, of course, the rain focuses on the fall and the winter. Because then the weather-controlling current takes much further south than in the summer and the low pressure areas can repeatedly advance to the Mediterranean. However, the last weeks since September are definitely an exception. Already in the late summer and in early autumn, the south of Europe suffered some stormy weather with some terrible devastation. And this repetition of the extreme weather is definitely an exception. This also applies to the intensive rain and snowfall in the southern Alps, where in recent years some hundreds of liters of precipitation have come together. In the high mountains with new snowfall, so unprecedented so early in the season in recent decades. And a lasting relaxation is not for the time being. At least in the coming week in parts of southern Europe further rains with lightning and thunder are to be expected.