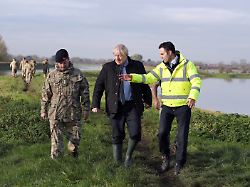 "You took your time, what Boris?" These words greet British Prime Minister Johnson in northern England. People obviously feel abandoned in the face of massive flooding.
British Prime Minister Boris Johnson has had to hear serious allegations when visiting a flood area in northern England. For days whole stretches of land in parts of the country are under water. For Johnson, who is in the middle of the election campaign, the situation becomes more and more a burden. On December 12, the British are to elect a new parliament. In a village in North Yorkshire, one woman who was busy clearing up Johnson's hushed offer: "They have not helped us yet, I do not know what you're here for today ", she said and just let Johnson stand, as shown on a video from the news channel Sky News. A man called out to him: "You took your time, what Boris?" The flooding affects mainly the Northeast and the Midlands. Entire villages are cut off from the outside world. Thousands of people had to leave their homes. But there is also a risk of flooding in other parts of the country. For Thursday, new rain is announced. In part, soldiers were deployed to reinforce dams with sandbags. It was only on Tuesday that Johnson called the National Crisis Team Cobra over the situation – after opposition leader Jeremy Corbyn of the Labor Party accused him of not doing enough. Britain is supported by the EU. At the request of the British authorities, the Copernicus Earth Observation Program was activated to make satellite imagery of the flooded region, as an EU Commission spokeswoman in Brussels said. The Commission is ready to provide further assistance. So far there has been no request.