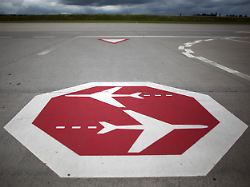 The Grand Coalition wants to make flying more expensive – for the sake of the environment. But the money from the recently increased air traffic tax flows not in the climate protection, but straight back into the air. Starting in 2020, the federal government will be supporting lucrative regional airports with millions in sums.
Distressed regional airports are to be supplemented with money from the federal budget. According to a decision of the Budget Committee of the Bundestag, quoted by the Editorial Network Germany (RND), subsidies amounting to 20 million euros will flow to more than a dozen regional airports in Germany next year. The amount swells in the medium term even to 50 million euros a year, RND reported. Specifically, it is envisaged that the federal German air traffic control (DFS) will take over the arrival and departure checks at the regional airports. The fees due for this purpose should be partially reimbursed to the operators. Eckhardt Rehberg, budget spokesman for the CDU / CSU parliamentary group, said the report said: "We strengthen the regional airports in Germany with its many hundred direct and indirect employees." The project will be financed by the increase in the air traffic tax, which comes into force on April 1, 2020 and ticket prices can rise depending on the route between six to 17 euros. The drastically increased aviation tax should actually make flying more expensive. The Grand Coalition had explained the measure by helping to reach its own climate goals. Traffic experts do not convince the turn. "New subsidies for regional airports are the opposite of climate protection in transport," said Dirk Flege, managing director of the Pro-Rail Alliance, RND. "The coalition can not make it clearer that it lacks the courage to consistently orient its transport policy towards a climate-friendly course."