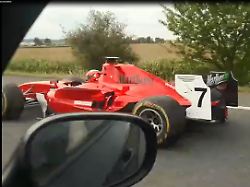 Without street approval but with 600 hp, a man with a fake Formula 2 cars on the highway. For two months, the police look for the driver, then they find him. The reckless action could cost the 45-year-old dearly.
With a race car like Formula 2, a driver in the Czech Republic on the highway caused a stir. Many drivers were surprised when the bright red car passed them by at Pribram in Central Bohemia less than two months ago. But for the driver, the action now has an aftermath. The police made the 45-year-old now find, as a spokeswoman announced.Weil the racing car with 600 hp under the hood has no street legal, the owner threatened a fine of the equivalent of just under 400 € and the withdrawal of the license for up to a year. The sports car had neither a license plate nor turn signals or headlights. Such a vehicle has to look for anything on the highway, said the police spokeswoman. The authorities also released a video of a dashboard camera. It was to see how the would-be racer after a passing maneuver right on the right. According to a Czech Motorsport magazine, the unusual vehicle was an older model from the Italian forge Dallara, type GP2 / 11 or F2 2018.