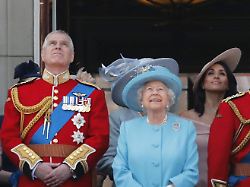 His former friendship with Jeffrey Epstein brings in British Prince Andrew in the here and now. With an interview he tries to negate alleged entanglements in the machinations of the deceased multimillionaire. That fails. Nevertheless, the intercession of his mother is certain.
The British Queen Elizabeth II has again shown up with the heavily criticized Prince Andrew. As can be seen in photos in the British press, the 93-year-old monarch was accompanied by her second eldest son on leaving the sprawling castle grounds in Windsor near London. The Queen is considered a horse lover who still climbs several times a week in the saddle. The joint ride is likely to be interpreted as a statement of solidarity. Buckingham Palace did not want to comment on request. In the summer, the Queen demonstratively demonstrated with Andrew on her way to the church in Balmoral, Scotland. Andrew is currently in the focus of the media because of his connection to the late US businessman Jeffrey Epstein. The multimillionaire Epstein had taken in early August, according to data from forensic doctors in a New York prison life. He was accused of abusing and forcing dozens of minors into prostitution. Andrew was friends with Epstein for many years and also spent the night in his estate. One of the alleged victims, Virginia Giuffre, claims she has been forced into sex with the Royal several times. Andrew denies that and does not want to hear about the machinations of his former friend. In a BBC interview aired last weekend, he tried to justify himself. But the shot went backwards. His explanations were widely perceived as untrustworthy. In addition, he was accused of not expressing sympathy for the victims of Epstein.Private Secretary as a pawn sacrifice The pressure on the prince increased enormously during the week. More and more sponsors withdrew their support for projects that Andrew supports as patron. On Wednesday, he announced his resignation to the Royal Family and promised to help "all relevant investigative authorities". US victim lawyers called on the prince to testify in civil claims under oath. As a consequence of the BBC interview Prince Andrew is said to have terminated his private secretary Amanda Thirsk at the request of the Queen. This is reported by several British media. Thirsk is accused to have been the driving force behind the interview – nevertheless, Andrew is allegedly planning to continue to employ them privately. For years she was one of the prince's closest confidants. Meanwhile, the Royal allegedly abused Virginia Giuffre should have given the BBC an interview. It is reported to be aired in the coming weeks.