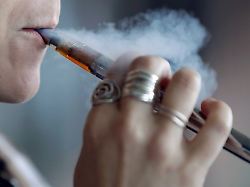 Not only in this country, e-cigarettes are becoming increasingly popular, even in the US, they are booming. However, there are now 39 deaths and more than 2,000 injured officially confirmed – after the use of e-cigarettes.
The number of deaths following use of e-cigarettes in the US continues to rise. According to data released by the US Department of Health (CDC), 39 people have already died. The victims were therefore from 24 states. The number of patients also increased to 2051 confirmed cases. A week ago, the CDC had reported 37 dead and 1888 sick. The cause of the lung damage is still unclear, according to CDC. Recently, there had been evidence that THC products might play a role. THC (tetrahydrocannabinol) is in cannabis and is mainly responsible for the intoxicating effect of the drug. In Germany and also throughout Europe, no similar increase in lung damage is known. The complaints still seem to be limited to users in North America. In Germany, the compositions of the active ingredients of e-cigarettes are more strictly regulated than in the US.