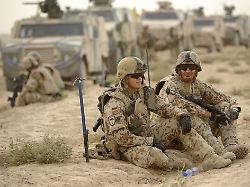 According to a report, the United States will soon withdraw 4,000 of the original 13,000 soldiers from Afghanistan. CNN relies on information from a government official. The measure is expected to be announced later this week. The soldiers know nothing.
According to media reports, the US will announce the partial withdrawal of its troops from Afghanistan next week. Around 4,000 US soldiers are said to be leaving the country, the NBC broadcaster and other US media reported, citing government circles. Around 13,000 US soldiers are currently stationed in the country. CNN broadcaster quoted a government official that the withdrawal could be announced this week, but the schedule was "constantly changing". A spokesman for the U.S. Armed Forces in Afghanistan told AFP that the troops had not received a withdrawal order. About a week ago, the United States and the radical Islamic Taliban resumed peace negotiations after a three-month hiatus. However, they were interrupted again on Thursday after a bomb attack near the US military base Bagram with two deaths and dozens injured. The talks focused on the conditions for a partial withdrawal of the US military from Afghanistan. In return, the Taliban should break away from the al-Qaeda terror network, fight the Islamic State (IS) jihadist militia, and start direct negotiations with the government in Kabul to be able to demonstrate a success in foreign policy for the election year 2020. The United States entered Afghanistan in 2001 after the September 11 attacks to combat the al-Qaeda network. In the negotiations, all issues relating to a possible future division of power between the Taliban and the internationally recognized Afghan government are particularly sensitive. The Taliban has always rejected direct talks with the government in Kabul.