Menu
Home > news > "Has no place in the Bundeswehr": AKK wants to crack down on radicals 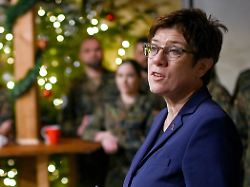 After becoming aware of a new scandal involving right-wing extremists in the Bundeswehr, Defense Minister Kramp-Karrenbauer announces consequences. Radicals have no place in the troop, she says. This applies above all to the elite unit KSK.
After becoming aware of a neo-Nazi scandal in the Bundeswehr Elite Unit Special Forces Command (KSK), German Defense Minister Annegret Kramp-Karrenbauer has announced a consistent and tough approach. "We have drawn first consequences in this case and we will continue to pursue each case with the same severity and the same consequence," said the head of the CDU during a visit to Kosovo. "Anyone who in any way radical in the Bundeswehr striking, has no place in this Bundeswehr ", stressed the Minister. This applies in particular to the KSK. This is "a piece of figurehead – it feels itself as such and therefore it has a special responsibility to counter any tendency to radicalism," said the CDU politician. "We take every case very, very seriously, and we examine in particular also, whether there are networks and connections behind it, "the Minister continued. This is the reason why the Military Shielding Service (MAD) a work focus and a working group "just set up with regard to the KSK." Also two staff officers under suspicion "Bild am Sonntag" previously reported that the MAD suspects a KSK sergeant in the bivouac runway to be a right-wing extremist. The Federal Ministry of Defense confirmed therefore months of investigation against the soldier. The suspect is supposed to be removed in the coming days from the service. The Ministry will also "criminal charges against unknown because of secret betrayals". Also two staff officers are according to the report under suspicion. They are said to have shown the Hitler salute after "BamS" information at a private celebration of the corporal. Accordingly, one of the two officers was forbidden from practicing the service a few weeks ago, and is no longer allowed to wear a uniform. The other officer is led by the MAD as a "suspected case". The elite unit KSK, whose tasks include the rescue and liberation of people from captivity, hostages or terrorist threat abroad, has long been talked about right-wing extremist tendencies of individual members. The Chief of the Military Shielding Service (MAD), Christof Gramm, recently spoke of around 20 cases of suspicion at the KSK. In the last two years, a total of around 40 criminal cases against members of the KSK are six cases in which the existence of right-wing extremist backgrounds is upheld Prosecutors is or was examined. This reported the "world", citing information from the army. Three of these procedures have been discontinued.