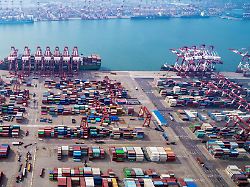 No funding for the world's second largest economy: The US President Donald Trump's government wants to cut China off from World Bank lending. In the US, it is believed that Beijing also uses the money for "vile purposes."
US President Donald Trump has called on the World Bank to stop lending to China. "Why is the World Bank lending money to China? Could it be possible? China has a lot of money, and if not, they can do it. Stop it!" Trump wrote on Twitter. Despite objections from the US, the World Bank recently approved billion-dollar loans on favorable terms to China. For example, the People's Republic, with which the US has been involved in a trade dispute for months, is expected to receive between 1.0 and 1.5 billion dollars in loans at low interest rates by mid-2025. The five-year plan adopted last week stipulates that lending should be "gradually" melted down compared to the previous five-year cut of $ 1.8 billion. The Beijing government had asked for funding. According to the World Bank, this will boost market and tax reforms, promote greener economic growth and improve citizens' access to health and social services. China grants its own loans US Treasury Secretary Steven Mnuchin opposed the promotion. The second-largest economy in the world, after the US, is too wealthy for such international aid, he criticized. China itself forgives hundreds of billions of credits to other countries for building the so-called New Silk Road, which is designed to improve communications between the People's Republic and other regions of the world. Chuck Grassley of the Senate Finance Committee called on the World Bank to raise $ 50 million to put on hold for a project in western China. Given the repression of Muslims in the region, there is a suspicion that behind the alleged training center hides a reeducation camp, which should be funded with millions. According to officially unconfirmed estimates, China's authorities have put hundreds of thousands of people into such facilities. Grassley pointed out that the World Bank's money should not be used for "vile ends" and that China would lend to third countries for geopolitical motives. This would lead the system to absurdity.