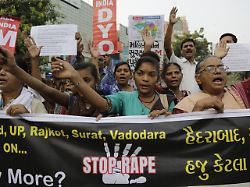 Sexual violence against women and children is common in India. While protesters are now coming to protest in many cities because of the brutal rape and murder of a 27-year-old, the country is shaken by another tragic news.
In India, anger is intensifying over the never-ending series of rape and murder of girls and women. While protesters in New Delhi, Hyderabad and Bangalore took to the streets to rape a 27-year-old veterinarian, reports of rape and strangulation hit a six-year-old in Rajasthan. The six-year-old body was discovered half-naked in a shrubbery. The police arrested a 40-year-old suspect. According to the first investigation, the girl was raped and strangled with the belt of his school uniform. The veterinarian, who was murdered last Wednesday, was raped by four men in a suburb of Hyderabad, then doused and burned. On Saturday, police forcefully detained an angry crowd in Hyderabad from storming the police station where the four suspects were being detained. Demanding "lynching". Mass demonstrations in many parts of the country have introduced stricter laws to protect Women demanded. According to the British Guardian, activists talk of a "failure" of the government to control crimes against women. A women's rights activist from Mumbai said, according to the news page, also the lack of female police officers is one of the reasons for the problem. Former actress Jaya Bachchan, who is now a member of parliament, called for "lynching" of the perpetrators. Another MP called for castrating rapists. In April 2018, the Indian government issued a decree imposing the death penalty on the rape of children under the age of 12. Sexual violence against women and even children is commonplace in India. It was not until Saturday that a 16-year-old rescued her serious injuries in a New Delhi-based hospital after being raped and killed by a neighbor ten days earlier. High-caliber numbers According to official statistics, more than 19,000 minority rapes were recorded in the country in 2016. In 2017, there were 10,000. With a population of 1.3 billion, the numbers sound rather low. In comparison, in Germany, just over 11,000 rapes were recorded on women and girls in the same year, with a total population of 82 million. In India, however, the number of unreported cases is likely to be much higher. For years, activists have complained that much of the sexual assault in India is not reported. Too great is the fear of being stigmatized by the police. In many cases, corrupt policemen also cover the perpetrators. Only a few months ago, three officials in Kashmir were sentenced to prison terms for having destroyed evidence after the rape of an eight-year-old.