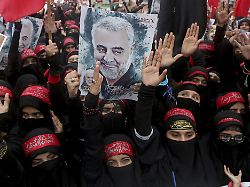 The United States killed Iranian General Soleimani with an air strike. President Trump justifies the operation with concrete attack plans. An opinion of the Bundestag, however, doubts the reason. Rather, the experts consider a violation of international law to be likely.
The Bundestag's scientific services have considerable doubts that the targeted killing of the Iranian general Ghassem Soleimani by the US military is compatible with international law. "According to the US administration, it is not clear why the killing of Soleimani in Iraq should have been absolutely necessary to ward off an acute threat to the lives of Americans ultima ratio," said a report by the Left faction was commissioned. The deadly drone attack on Soleimani "obviously does not meet the criteria for a 'final rescue shot'" and therefore appears to violate the right to life laid down in the United Nations Civil Pact. Soleimani was killed by a U.S. drone in Iraq in early January. Washington justified this with allegedly impending attacks on US citizens and embassies, but has not provided any evidence. The scientists of the Bundestag also question the legality of the Iranian reaction, which Tehran also founded on self-defense. Military bases in Iraq, where US soldiers are stationed, were attacked with rockets on January 8. The right of self-defense under Article 51 of the UN Charter does not apply in this case, since the drone attack had already been completed at the time of the counter-attack, the report said. "Iran is not claiming any imminent US threat to be averted by the missile fire. There are no reliable indications that the US had planned to eliminate other members of the Iranian leadership circle." The German government is still reluctant to evaluate it The federal government has not yet given an assessment of whether the targeted killing of Soleimani is covered by international law. In an answer to a corresponding question by left-wing MP Sevim Dagdelen, the State Secretary at the Federal Foreign Office, Antje Leendertse, writes: "A comprehensive assessment under international law requires a detailed analysis of all the actual circumstances of the case. These are not available to the Federal Government." The left sharply criticizes the government's stance. "The opinion of the scientific service is a slap in the face for the federal government, which to this day still avoids the condemnation of the death warrant of US President Donald Trump as well as the Iranian counter-attacks on US military facilities in Iraq," said deputy parliamentary group leader Heike Hänsel , "Those who, like the federal government, give Trump the backing of false alliance solidarity to trample international law make themselves completely unbelievable as mediators for de-escalating the conflict in the Middle East."