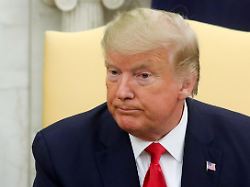 After the deadly drone attack on an Iranian general in Iraq, Tehran vows "severe revenge" for the United States. Washington warns. Nevertheless, Iran fires missiles at Iraqi military bases with US soldiers. How will US President Trump react?
In retaliation for the killing of its top general Ghassem Soleimani, Iran attacked two military bases in Iraq used by US soldiers. The Ain al-Assad airbase and a base in the northern city of Erbil were affected, the U.S. Department of Defense said. The most important ministers of US President Donald Trump met in the White House for a crisis meeting. Trump only warned Tehran on Tuesday: "If Iran does something it shouldn't do, they will experience the consequences. And very strongly." The Iranian Revolutionary Guards said that "Operation Martyr Soleimani" had "completely destroyed" the Ain al-Assad airbase, which was attacked with 35 missiles. The attack by ballistic surface-to-surface missiles on the "American-occupied" base was "a complete success in every respect." New escalation level Although local Shiite militias supported by Iran have recently had more US bases in Iraq, technically simpler missiles attacked. However, a direct attack from Iran marks a new escalation in the conflict between the United States and Iran. The Revolutionary Guards warned the "great Satan" USA of counterattacks immediately after the attacks. Every US response will be met with a tougher response, the elite unit of the Iranian armed forces said. In addition, US allies should know that their bases, which are made available to the Americans, could also be the target of Iranian attacks, if attacks on Iran were carried out from there, it said. The United States should withdraw its troops so that their lives are not endangered. Around 5,000 US soldiers are stationed in Iraq; German Bundeswehr soldiers are also stationed in Erbil. A spokesman for the operational command said the soldiers in the north are doing well. After the latest withdrawal, no more German soldiers were stationed in central Iraq. Iraqi security circles also confirmed that several rockets had hit the Ain al-Assad airbase in the west of the country on Wednesday night. Explosions were also heard on the basis. Around 5,000 U.S. soldiers are stationed in Iraq, leading an international military alliance to fight the terrorist militia Islamic State (IS). "We're working on initial damage assessments," the Pentagon said after the attacks. The US military initially made no statements regarding possible victims. "These bases have been on high alert for signs of planned attacks by the Iranian regime on our troops and interests in the region," Washington said. Solemani was killed by US drones in the Iraqi capital of Baghdad on Friday night. Washington then said the head of the Al-Kuds units had planned to attack US citizens. Soleimani was the main representative of the Iranian military abroad. He was considered the architect of Iran's military strategy in neighboring countries. In Iran he is now worshiped as a martyr.