Menu
Home > news > Record since reunification: More and more people have a job 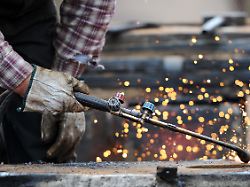 Last year, 45.3 million people in Germany were employed. The employment rate has reached its highest level since reunification. On the other hand, fewer and fewer people are choosing to become self-employed.
In Germany, more people have worked than in the past year since reunification. 45.3 million people were either self-employed or had a job, as the Federal Statistical Office reported. With 402,000 more employees than in 2018, the increase that has continued for 14 years has continued. At 0.9 percent, however, growth was lower compared to the previous year than in 2018, when the rate had increased by 1.4 percent. The rise in employment has been going on for 14 years, with immigration and greater labor force participation more than offsetting the demographic effects of an aging society, while the number of employees in Germany grew by an average of 475,000 in 2019 to 41.1 million in 2019 the number of self-employed and their helping family members continued to decrease – by 1.7 percent to 4.15 million. The Federal Office announced that the last time there were fewer self-employed persons in 2003 was unemployment, while the number of unemployed according to an internationally comparable definition, on the other hand, fell provisionally according to preliminary estimates by 96,000 or 6.5 percent to an annual average of 1.37 million. The unemployment rate fell from 3.2 percent to three percent, and most new jobs were created last year according to statistics in the service sectors such as education and health. This was followed by trade, transport and hospitality as well as information and communication.