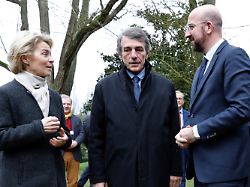 With the exit from the European Union, the situation for Great Britain on the EU internal market changes. While the EU is pointing out the consequences of Brexit, the British Prime Minister is swearing his country into a "new era".
Just before Brexit, EU Commission President Ursula von der Leyen, Council President Charles Michel and EU Parliament President David Sassoli affirmed that Great Britain could no longer have unrestricted access to the European internal market after leaving the Community. In a joint article for the "Frankfurter Allgemeine Zeitung" they write that no decision is without consequences. However, they said they would work hard to "find new ways of working together for our future as allies, partners and friends". Britain also wants to continue to work closely with the EU, wrote British Foreign Minister Dominic Raab in a contribution to the newspaper. "So alongside our European partners, we are still committed to expanding trade, improving security and addressing common challenges around the world." Above all, Britain will be an independent nation "that will determine its own future can and will have control over their borders, laws and trade ". Raab announces that by the end of this year, "the best possible arrangements for new relationships" should be negotiated "that take into account the will of the people in the 2016 referendum." Johnson promises "new era." Prime Minister Boris Johnson is fueling optimism. He wants to use a nationwide television speech to get the British in tune with the time after leaving the European Union and call for unity. "This is the moment when dawn breaks and the curtain rises for a new act," says the speech, which is scheduled for Friday evening. "This is the dawn of a new era in which we are no longer accept that your chances in life – the chances in your family's life – should depend on which part of the country you grow up in. This is when we start to unite and improve. " It was his job to bring the country together and move it forward. "And the most important thing to be said tonight is that this is not an end but a beginning … It is a moment of real national renewal and change." Johnson's office published the excerpts from the speech in advance. Britain leaves the EU at midnight more than three and a half years after the Brexit referendum. The country belonged to the international community for 47 years.