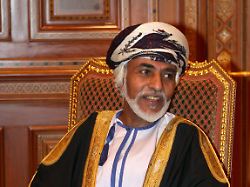 Oman has pursued an independent foreign policy for years and maintains unofficial contacts with Israel. Sultan Kabus is partly responsible for this. The head of state has now died of cancer. There is already a regulation for his successor.
The Omani Sultan Kabus bin Said died at the age of 79. The state media reported early Saturday morning. According to media reports, the monarch succumbed to cancer. A three-day state mourning was proclaimed in Oman; Kabus had ruled the Sultanate of Oman single-handedly for almost 50 years, transforming it from a backward region into a modern, prosperous state. The Kabus, trained at the British Sandhurst Military Academy, had taken power in the country on July 23, 1970 at the age of 29. At that time, with the help of the military and the British secret service, he toppled his father Said from the throne. This had sealed off the country from the outside and refused to modernize. Under the rule of Kabus, Oman developed into a modern and stable state with the help of oil revenues. The Arab uprising in 2011 passed the Sultanate almost without a trace. Human rights activists, however, complain about the lack of freedom of expression and the arrest of government critics in the autocratically governed country. Internationally, Kabus positioned Oman as a mediator between Iran and the West. Oman is also considered a state that maintains unofficial contacts with Israel. In April, Oman called on the other Arab countries to end Israel's fears of livelihood, and Kabus, who was born on November 18, 1940, had recently been in Garmisch-Patenkirchen for medical treatment, where he had an estate possessed. He has no son and does not leave an heir to the throne. According to the constitution, the royal family must agree on a successor within three days. If this does not succeed, according to media reports, a secret letter from Kabus should be opened. In it he allegedly recorded the name of the new ruler.