Menu
Home > news > The other side of hemp: What can CBD products really do? 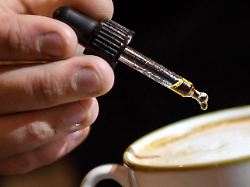 Hemp is not only the source material for intoxicating cannabis, but also for textile fibers, insulation materials and in cosmetics. Now there is a new trend: Products with cannabidiol are said to alleviate pain and inhibit inflammation. But there is no evidence of this.
Nico Schack carefully drops a little oil into the coffee with a pipette. The price of the cup has almost doubled. In the "Café Canna" in Berlin-Prenzlauer Berg you can get your hot drink for an additional 1.80 euros with a hyped and controversial active ingredient made from hemp. It's about cannabidiol, or CBD for short. One of the other active substances in cannabis may still be better known: tetrahydrocannabinol (THC), responsible for the intoxication effect of the drug. The psychiatrist Kurosch Yazdi, head of the addiction department at the Kepler Uni-Klinikum in Linz, Austria, describes CBD "to a certain extent as the opposite of THC": it has no addiction potential and does not impair driving ability. CBC is touted as a miracle drug is? One reason is the alleged effects against various ailments, which celebrities like US star Kim Kardashian and influencers also report. On some websites, oil enriched with CBD is advertised as a miracle drug: "Helps against diabetes (type 2)". Ten milliliters of such an oil can cost around 80 euros. Experts are experiencing a boom in Germany: oils, capsules, gummy bears, chewing gum and cosmetics – all kinds of goods are advertised with the addition. According to the consumer centers, the internet is the main hub, but more and more shops are springing up, as Wiebke Franz from the Hessen consumer center explains: "There is no sensible regulation," said Georg Wurth from the German Hemp Association. One of the questions is whether CBD products can be marketed as novel foods without approval from the European Commission. Authorities and consumer advice centers say: No, no sale without verification. Manufacturers rely on the long tradition of hemp use. Courts deal with the different legal opinions. Loopholes and dosages Some providers use loopholes to protect against possible annoyance: "Smoked goods" are on CBD flowers, CBD oil is declared as an aromatic oil. The wild growth continues: Studies have shown that the specified CBD dosage does not always correspond to the facts – sometimes there was less in it, sometimes more. According to consumer centers, too high levels of THC have also been found, and what CBD could actually do for health is still unclear. There are indications of an anti-inflammatory and pain-relieving effect, according to consumption center expert Franz. However, these are not yet sufficiently secured by clinical studies. Questions about dosage, safety, side effects and interactions are also unresolved. The CBD products available in hemp shops, for example, are almost always so low that they have no effect, says expert Yazdi. The "imputed effects" are "pure profiteering". According to Yazdi, CBD users report pain relief as "fairly certain with the placebo effect". "People are longing for a miracle cure that has no side effects." Drug expert Gerd Glaeske from the University of Bremen believes that buyers of CBD-containing products often do not know that mainly the prescription cannabis forms offer a medical benefit. He sees the CBD offer as "a business with the psyche and hope of people". CBD is actually approved as a medicine for the treatment of two severe and rare forms of epilepsy in children. Some parents mistakenly consider it a "gentle natural product", the German Society for Clinical Neurophysiology and Functional Imaging said recently. In studies, "quite a few children" had side effects such as severe fatigue, fever, loss of appetite and diarrhea.