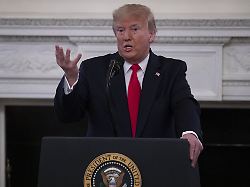 US President Trump is putting a draft budget for 2021 on the table that will provide much more money for armaments and border guards. It is cut back in education and drastically in the environmental area. The design is still just a catalog of wishes.
US President Donald Trump has submitted a $ 4.8 trillion budget proposal for the 2021 financial year. National security is a top priority. Trump wants to spend significantly more money on modernizing the nuclear arsenal, for example. In the areas of the environment, education and development aid, according to the President's will, there will be drastic cuts. His budget plan set the course for America's dominance and prosperity to continue, Trump said in the plan. Nuclear ArsenalTrump wants to put more money into modernizing the US nuclear arsenal. The National Nuclear Safety Agency is said to be able to draw on $ 3.2 billion more – an increase of almost 20 percent. The arsenal of nuclear weapons must be "robust" and "effective" to protect the country, reinsure allies and deter opponents, the reason given. "America's nuclear deterrence is the safeguard and foundation for national defense and that of the American allies." According to the US news website Axios, it is about funding a number of programs to prolong the life of warheads, but also about funding for the development of new nuclear warheads.Border protectionThe budget plan provides around $ 2 billion in fresh money for the construction of the border wall with Mexico in front. These funds are to flow into the construction of around 130 kilometers of border wall. With funds approved between 2017 and 2020, the government would be able to build more than 1,600 kilometers of the wall along the southwest border. Building the wall on the border with Mexico is one of Trump's key promises from the last election campaign. By mid-January, according to the Ministry of Homeland Security, only around 160 kilometers of the new border wall had been completed – this corresponds to about 5 percent of the approximately 3,200 km long border. Trump promises that up to 800 kilometers will be completed by early 2021 – which is considered very optimistic.Environment Trump wants to push through the environmental protection agency EPA. This should receive 26.5 percent less funds than in the approved period of the previous year. The agency's budget is shrinking to levels it most recently had in the 1990s, the New York Times reported. The EPA is pursuing an "efficient, effective approach" that supports its core tasks such as ensuring that air, water and land are clean, but at the same time avoids unnecessary expenditure. This is remarkable in times of climate change. Trump no longer describes climate change as a "joke", but he still doubts that climate change is man-made and considers aspects of the debate to be exaggerated. Trump's plan is unlikely to be implemented in this form. US presidents traditionally submit their own budget plans, which are primarily wish lists. The Congress will decide on the budget at the end. The Democrats have the majority in one of the two chambers. The representative in the House of Representatives, Nancy Pelosi, criticized the plan. "The budget reflects values. And the president shows once again how little he cares about the health, financial security, and well-being of hard-working American families," she said. The White House and Congress have to move to a new budget by the end of September agree to avert government standstills. The budget plan is the last one that Trump presents during this term. Elections are held in the United States in November. The Republican, who boasts good economic data and low unemployment in the election campaign, has a good chance of being re-elected.