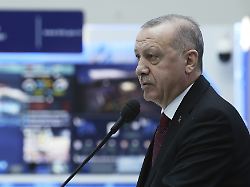 Violence escalates in the Syrian rebel stronghold Idlib: after the death of five Turkish soldiers, the government in Ankara reports a revenge blow against the Syrian army. President Erdogan sees more than just Turkey under fire from Assad's troops.
As revenge for the death of five Turkish soldiers in a Syrian attack in the contested Idlib region, Turkey has "neutralized" more than a hundred Syrian soldiers. In addition, three tanks and two cannons were destroyed, the Turkish Ministry of Defense said. A Syrian government helicopter was also hit in the retaliatory attack in the northwest Syrian region of Idlib. The figures given by the ministry could initially not be verified by an independent party. Previously, Ankara had only announced that five Turkish soldiers had been killed in the attack by the Syrian army in Idlib, and five others had been injured by Turkish artillery fire. The Turkish Defense Forces had shot back, the Ministry of Defense in Ankara initially only announced. Turkish President Recep Tayyip Erdogan's spokesman Fahrettin Altun wrote on Twitter that the Turkish army had retaliated to "destroy all enemy targets and avenge our fallen soldiers." With regard to Syria's ruler Bashar al-Assad, he added: "The war criminal who ordered today's heinous attack has attacked the entire international community, not just Turkey." Taftana Air Force Base north of the city of Sarakeb. The UK-based organization, which relies on a network of whistleblowers in Syria, did not initially provide figures on the victims. According to the observatory, the number of civilians killed in the past 24 hours by Syrian and Russian airstrikes has increased to 29. Among them are six children, the observatory said. They were killed in Russian-backed attacks by the Syrian army on the village of Abin Semaan in Aleppo province. Initially, there were five civilian casualties, and 700,000 civilians on the run last week, after Syrian shelling of Turkish positions in northwest Syria had escalated between the two sides. Eight Turks had been killed in the Syrian attacks. The government in Ankara had threatened to retaliate in the event of a renewed attack, and military escalation in northern Syria is driving more and more people away, according to the UN. Almost 700,000 people have fled Syria's last rebel stronghold since December. In the face of violence, countless families fled north-west from Syria. "The number of people displaced by this crisis is now getting out of control," said the spokesman for the UN Humanitarian Aid Office (Okha) .Russian delegation in Ankara Since December, Syrian government forces have been taking military action against them with the support of Moscow predominantly Islamist and jihadist militias in the Idlib province. Syria's ruler Assad is determined to regain control of the area. Neighboring Turkey, which supports Assad's opponents, has several observation posts there. Idlib is the last stronghold of Islamist fighters in Syria; Turkey and Russia signed an agreement in September 2018 to prevent a large-scale Syrian offensive against the militias in Idlib. Various ceasefires have been agreed for the region with around three million inhabitants, most recently at the beginning of the year. However, all fire breaks were broken shortly after their entry into force. The Turkish Army's twelve observation posts in Idlib are also part of the agreement with Moscow. A Russian delegation has been in talks about the situation in Idlib in Ankara since Saturday. Talks were expected to continue on Monday.