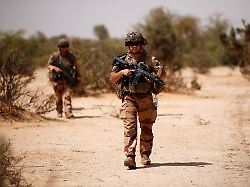 France wants to continue its struggle against Islamist militias in the Sahel region with relentless harshness. Instead of the 220 soldiers originally planned, 600 additional soldiers will now be transferred to the African region. The mobilization links Paris with an appeal to the allies in the EU.
France is increasing its troops in the fight against jihadist militias in the Sahel zone even more than initially announced. Paris will send an additional 600 soldiers to combat Barkhane in the African crisis area, said French Defense Minister Florence Parly. This increases the French troop presence there to 5,100 soldiers. French President Emmanuel Macron had previously announced that only 220 additional soldiers would be deployed, and some of the reinforcements would be deployed in the border area between the states of Mali, Burkina Faso and Niger, Parly said. The other part will be used together with the armed forces of the G5 Sahel states Mali, Niger, Chad, Burkina Faso and Mauritania and will fight against the Islamists together with them. Together with allied African countries, France changed course at a summit in Pau in southwestern France in mid-January. The states have announced that the fight against Islamist terrorist groups will be concentrated on the particularly vulnerable border area between Mali, Burkina Faso and Niger. The main enemy there is the terrorist group Islamic State of the Great Sahara, an offshoot of the IS terrorist militia. Advertising for European partners in the Sahel zoneParly described the recent decision as a "significant step" in French engagement in the Sahel zone. The mobilization should also be a "turning point" for the engagement of other European countries and strengthen the armed forces of the G5 Sahel states. "The fight against terrorism is our priority. In the Sahel region, France is at the forefront, but must not remain alone," said Parly. France has been trying to get European partners on board for a long time. According to earlier information, Germany has refused requests for participation in a deployment of European special forces to fight Islamists in Mali twice. The deployment of Barkhane (sickle dune) is controversial in France. A number of armed groups are active in the countries of the Sahel region – an area that extends south of the Sahara from the Atlantic to the Red Sea. Some have pledged allegiance to the Islamic State or Al Qaeda terror groups. At the end of November, 13 military personnel were killed in a helicopter collision in Mali. A few days later, the IS claimed the crash. The German Armed Forces are also deployed in Mali as part of UN and EU missions.