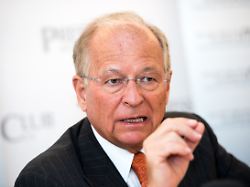 The major conference of heads of state and government, ministers and diplomats begins in Munich with the security conference. The conference leader Ischinger shows in the "ntv early start" that they are not worried about the leadership crisis in Germany. The Federal Republic was respected, but had to do more.
According to Wolfgang Ischinger, the leader of the Munich Security Conference starting on Friday, the political crisis in Germany does not change Germany's reputation in the world. "Germany was and is and is seen by the partners as the stable, central anchor in Europe," said Ischinger in the "ntv Frühstart". "Where can you find a single country in the world that has had the same head of government for 14 years?" Said Ischinger, referring to the long term of Chancellor Angela Merkel. Ischinger is therefore not concerned about the stability of democracy in Germany. "We have a situation where three quarters of the population choose democratic parties," said Ischinger. "It is wrong to panic now simply because we have another change in politics." That happens in other countries "every few months". The potential media candidates for a Union chancellor candidate are "all honorable people." Unfortunately, one has to say that the world has become more dangerous. We have more conflicts, we have more wars, we have more refugees in the world, " said Ischinger with a view to this year's security conference and called for a stronger engagement of Europe and Germany in the world. "The times when our American friends put the American security cheese bell over us are increasingly over," warned Ischinger. "We have to take care of ourselves more, otherwise the problems come, otherwise the terror comes to us from North Africa, from the Middle East."