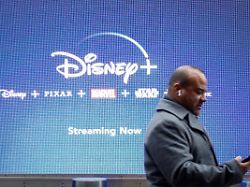 Disney earnings plummet by more than a quarter in the final quarter of 2019. Nevertheless, the entertainment group beats expectations, the share price also rises. The reason: The new streaming service counts more subscribers than forecast.
High costs for expanding the streaming business have plunged the US entertainment giant Walt Disney into a slump in profits. In the three months to the end of December, net income from continuing operations fell 23 percent year-over-year to $ 2.1 billion, the company said after the United States closed. Disney 130.76 Nevertheless, the stock increased significantly after the exchange. The investments are paying off: The Disney + streaming service, which only started on November 12, had already won 26.5 million subscribers by the end of the year – significantly more than expected: market experts had forecast around 20 million. Among other things, Marvel, Pixar and Star Wars films run on the platform. In Germany and other European countries, the service starts on March 24, and Wall Street sales were also exceeded, with sales up by around a third to $ 20.9 billion.