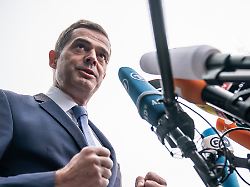 After days of criticism, Mike Mohring retires from the chair of the Thuringian CDU. He suggested to the state association that the state party convention be brought forward. He no longer wanted to run as president.
Mike Mohring has declared his retirement as the Thuringian CDU country chief. "A lot has happened this week. In Berlin and Erfurt," he wrote on Twitter. He suggested to the regional board of the CDU in Thuringia that the planned state party convention be held with regular elections to the regional board and that there be a personnel and content-related list for the future. "Our party needs pacification and for (sic!) Must find a common way," continued Mohring. He wants to make his contribution to this. He would not run again at the party congress as state chairman. "All the best of our @cdu_thueringen," he wrote finally. Mohring has been criticized since Thomas Kemmerich was elected Prime Minister of Thuringia. Together with the FDP and AfD, Kemmerich had elected his CDU as head of government. In the meantime, Kemmerich has resigned and is only managing director.