Menu
Home > news > "Early start" to Corona standstill: Oppermann: "Nobody can promise anything" 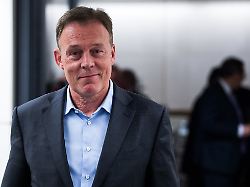 What's next in Germany? SPD politician Oppermann warns that if the economy stops for two months, the economy will "reach its limits". "It can't go that far," he says in the "ntv early start". At the same time, he admits that it may take some time.
Bundestag Vice President Thomas Oppermann has spoken in favor of a "Plan B" to end the standstill caused by the corona pandemic in Germany in the coming months. "We now have to look for ways to start the activities again in the foreseeable future," he said in the "ntv early start". "We cannot now set ourselves up in a completely bleak, that-remains-now-for-months perspective." At the same time, the SPD politician admitted that it could take some time. Many measures are limited until mid-April. "I do believe that we need the whole of April to gain the necessary knowledge and then make the right decisions." He further restricted: "Nobody can promise anything because it is a crisis that we have never experienced before. There is no reliable information for further developments." The SPD politician emphasized that human life and health too the highest values ​​also belonged to the constitution. If you shut down economic and social activity, you naturally have to weigh it against human health. "And I think that is clearly more important." According to Oppermann, the current isolation measures cannot be maintained over the long term. "Even if we stand still for two months, the economy will reach its limits. Companies will break down that won't come back afterwards. We will then lose part of our economy irreversibly," he warned. "It shouldn't go that far." When asked whether it makes sense to shield older and pre-ill people more than others, Oppermann said: "Right now it is right that we all hold back, not just those who are at risk , but also those who carry the virus, because otherwise it would overwhelm our ability to treat sick people. "Oppermann demands loosening of Iran sanctionsOppermann also demanded that the US loosen economic sanctions against Iran. It is a drama that is happening in Iran, he said in the "early start". "I advocate the US easing economic sanctions against Iran, at least temporarily, so that the country is economically able to activate more to deal with the crisis." According to Oppermann, it would also be wise if the federal government now campaigned for this. "As much as there is bitter hostility between the USA and Iran and you don’t give each other anything: This is a situation where one could actually say, with all hostility: In the end, in this crisis, all people are equal." That is why you have to send a signal right now that this could be a "very, very good political investment for the time after that." Oppermann also called for aid to Venezuela. The situation there is almost worse than in Iran because it is "completely run down". "There are almost no intensive care beds in this country, and there is a completely inadequate supply of medication." One should help Venezuela, here too the Americans could jump over their shadows. "People in these countries will never forget that if you help in such situations."