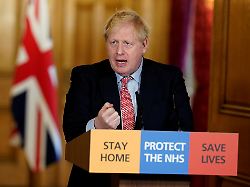 The British government has ordered millions of home tests for Covid-19 lung disease. However, it is not yet clear whether they will be used. It still has to be checked how reliable they are. They would be of great help especially for medical staff.
In the UK, millions of people at home could now test for Covid-19, a lung disease caused by the Sars-CoV-2 coronavirus. As the Guardian newspaper reports, the health authority PHE has promised the parliamentary committee for science and technology. Mass testing is therefore possible within days. The British government subsequently denied that it could happen so quickly, according to the report, which had bought 3.5 million tests to show whether someone had already fallen ill and could now be considered immune. The purchase of millions more tests is planned. Before these were used, one had to be sure that they would work, the British government said. Prime Minister Boris Johnson promised to massively expand the diagnostics. According to the "Guardian", the preparation in question looks like a pregnancy test. You have to prick your finger with it, then the resulting drop of blood will be analyzed. A result should be available in 10 to 15 minutes. Since this process is still completely new, it is not yet clear how reliable it is. However, the test only shows whether someone has already had Covid-19 because it detects antibodies in the blood, and whoever carries the coronavirus could still get a negative test result if no antibodies have yet been formed. However, it would be a valuable help especially for medical staff, according to the "Guardian", as doctors and nurses can quickly find out whether they have already had the disease and are therefore immune. This could shorten quarantine times and enable urgently needed personnel to return to the hospital faster.