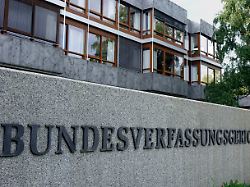 Asylum seekers who have changed their denomination may not be tested for their belief by the courts. This is decided by the Federal Constitutional Court, but also confirms judicial powers when reviewing asylum applications.
The Federal Constitutional Court has made it clear that in asylum proceedings for converts, there is a limit to a judicial review to assess one's conversion. The constitutional court stated in a decision published on Friday that there should be no formal or substantive "belief test" by the courts. However, courts must basically check whether there is a justified fear of persecution because of religion. The constitutional judges therefore did not accept the constitutional complaint of a rejected asylum seeker for decision. (Az. 2 BvR 1838/15) The complainant's application for asylum was rejected in 2011 by the Federal Office for Migration and Refugees. He later claimed in court that he converted to Christianity and was baptized in May 2013. He was therefore threatened with persecution if he was deported to Iran, and his lawsuit failed before the administrative courts. They concluded that he would not face religious persecution if he returned to Iran. The administrative court dealing with the case found, among other things, that he could not convince them of "a religious identity that shaped the Christian religion". Two-stage examination practice was confirmed The Federal Constitutional Court has now basically confirmed a two-stage procedure of the courts in such asylum procedures. The first step was to determine what sanctions threatened the asylum seeker in his home country. In a second step, it must be examined whether the practice of faith is "a central element for religious identity" and in this sense "indispensable". This examination by courts does not violate the right of self-determination of the churches or religious communities, nor the freedom of belief of the individual, the constitutional court decided . However, according to the decision of the highest German court, the administrative courts should not question the effectiveness of a baptism, for example. State authorities and courts are also prohibited from carrying out a "substantive belief test". However, a distinction needs to be made between the question as to which aspects of a belief or belief "in a fear of persecution-intensive intensity are or not formative for the religious identity" of the asylum seeker. Checking whether the prerequisites for recognition as a refugee exist is not a matter for the churches themselves.