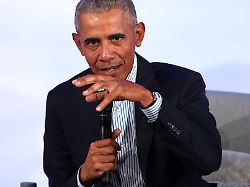 Former US President Barack Obama does not normally comment on the leadership of his successor. When speaking to university graduates, he now shows what he thinks of the current government's crisis management.
In a rare move, former US President Barack Obama publicly criticized the country's current leadership for dealing with the corona crisis. Speaking to a video greeting for a graduate graduation ceremony on Saturday, he said: "This pandemic has largely undermined our belief that the people in charge know what they're doing." "Many of them don't even pretend to be responsible," added Obama, referring to the current leadership. The ex-democratic president did not name any names. The media has seen the sentences as criticism of Obama's Republican successor Donald Trump and his government officials, and Obama has rarely appeared in public since he left office in January 2017. According to the tradition, he feels obliged that a former president does not publicly evaluate the work of his successor. In return, Trump has sharply attacked Obama several times.